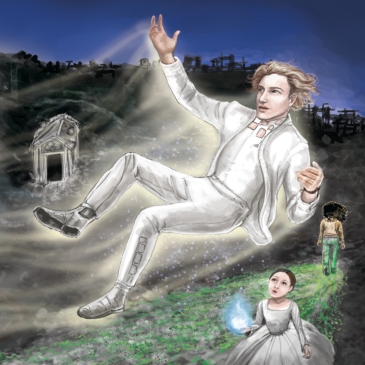 Time to go home
– ready or not.

Jon is an accidental time-traveller. He’s lived as a nobleman, as a refugee and most recently, in the supernatural Mountain of Glass. None of those places are home – which is the place he desperately wants to avoid.

But he’ll have to return to the world of the distant future. It’s a place where people’s worth is determined by the Creature they’re pledged to, and after a lifetime of being pledgeless (and feeling worthless) he’s made some incredibly dangerous choices. Is it any wonder he doesn’t want to return to face the consequences?

And Jon isn’t the only one out of time. Elspeth of Covington has escaped Tudar Angland of 1556 AD and is determined never to return. So when her best friend (and secret love interest) Jon returns to his own home, she takes the opportunity to follow him. Armed with new supernatural abilities gifted by Amaranthus, she now has the chance to protect someone who doesn’t know they’re in danger. The only problem is that she’ll arrive at a time before Jon has ever left, and therefore before he knows who she is…

But what Jon and Elspeth don’t know is that a battle is taking place in the Other realm, one between the Creatures themselves. The outcome will determine the fate of that realm, and of their own world too…

Read more about the Across Time & Space series

Get the ebook at Smashwords, Kobo, Apple iBookstore, Barnes and Noble (Nook book) or Amazon (Kindle).

Get the paperback at Amazon, Barnes & Noble or Book Depository.